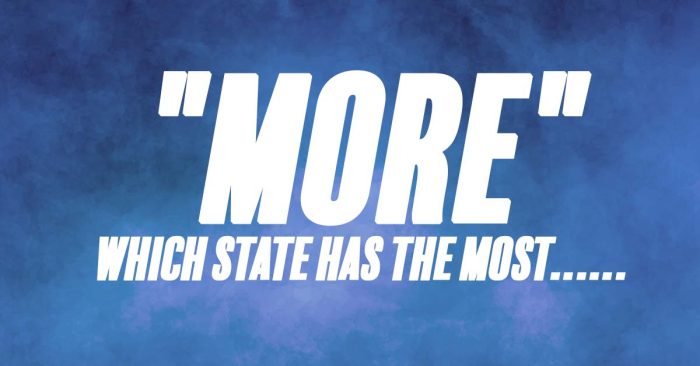 It is no doubt states are competitive. Everyone wants bragging rights in one area or another. Here is another edition of “Which states have the most…”

It may be surprising to learn that the state with the most public airports in the United States is Alaska. Alaska has 549 airports, due to the expansive area the state covers and how remote many of its communities are. California is next, with  522 public airports.

Many states have embraced efforts to convert old railroad tracks into biking and hiking trails that don’t allow motor vehicles. The “Rails to Trails” efforts began in the Midwest and that is where the states with the most extensive trail systems exist. At the top of the list is Michigan with 2,365 miles of trails, followed by Wisconsin and Minnesota. Pennsylvania is 4th on the list with about 1,740 miles of converted railways.

Florida is the undisputed champion when it comes to toll road miles in the United States. The Sunshine State has 719 miles of toll roads along with a number of toll bridges. Pennsylvania is a distant second at just over 500 miles of toll roads.

California has nine national parks, followed by Alaska with eight. In third place is Utah with five, followed by Colorado with four.

Are you getting the most out of your life, auto, home or business insurance premiums? We can help. Contact us for a no obligation insurance review and price quote. Our independent insurance agents will do the shopping for you! Connect with us today!